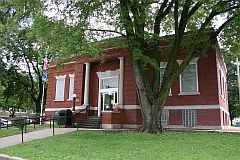 History of the Cherryvale Public Library

An institution which Cherryvale citizens look to with pride is the Cherryvale Free Public Library. The library is housed in a building of pressed brick with Carthage cut stone pillars, concrete foundations, oak flooring and beamed ceilings. It was built in 1913, and opened to the public on September 19 of that same year.

A complete renovation of the library was done in 1963, when the 50th anniversary of its construction was celebrated. The basement was repaired and glass windows installed. A new furnace replaced the old one that had been in used for 50 years, the roof repaired, exterior of the building cleaned and louvered screens installed.

At this time the lawn was graded to prevent seepage through the foundation. The grounds were attractively landscaped with hedges that not only beautified the surroundings but discouraged trespassing on the lawn. Much of the credit of the landscaping goes to a former member of the Library Board, Mr. Bob Burns. Since that time the building has been made more pleasant by the installation of air conditioning.

The history of the Cherryvale Library began at least as early as 1909 in a club that was the outgrowth of the Chautauqua Reading Circle, an organization formed locally in 1904. This organization decided in 1908 to use the Chautauqua plan for Bible study with the late Mrs. Josie Carl as leader. Then in the early fall of 1909 they reorganized and became the Cherryvale Women’s Club. A goal of the club was to establish a library.

Then the club decided to open a reading room and library, an adjoining room was planned that would serve as a place for rural women to rest and meet for a visit when shopping. This was in the horse and buggy days when for some, a trip to town was an all day event.

The project met an enthusiastic response when it was presented to the business men by Mrs. Foval and Mrs. Withington. Thus encouraged, two rooms were rented on the upper floor of the former Blankenbeker News Shop. Money, books, magazines and furniture were solicited. With the money, five bookcases were bought from a retired minister. A second-hand rug was purchased for the visiting room. The town was canvassed to interest people in buying library cards for one dollar each.

It was difficult to retain reader interest in a library so limited in books to lend. To supplement the books donated by citizens, boxes of fifty books each were rented for two dollars and the cost of transportation from the Traveling Library in Topeka. Boxes could be kept for six months and usually six to eight boxes were in use. Mrs. Shanton and Mrs. Seacat had the responsibility of returning these boxed libraries to Topeka. The members of the Cherryvale Women’s Club served, by turns as librarians and custodians. The library was kept open six days a week and evenings. Even so, rent for the rooms and books, and fuel and light bills made money raising enterprises continually necessary. The library was in its third year in 1912. The Cherryvale Women’s Club had become the Women’s Library Club with a more ambitious goal. It was to obtain a Carnegie Library for Cherryvale. Petitions requesting the necessary election were presented to city officials after much hard work by club members. Mrs. Shanton remembered that some doors were slammed in her face, but when the election was held on April 8, 1912, the proposition carried. Bonds were sold and with a grant from the Carnegie Foundation, the funds for a building became available.

The mayor, S.J. Harmon, appointed a Board of Directors for the library and they held their first meeting April 12, 1912. Mr. W.E. Ringle was elected president; Mrs. C.O. Wright, vice-president; Mr. A.M. Hough, treasurer; and Mrs. J.W. Sauer, secretary. Other members were Mr. Sullivan Lomax, Mrs. W.G. Norman, Mrs. Ellen Foval, Mrs. J.A. Brady and Mayor Harmon. Their first task was to determine the site and on Nov. 16, 1912, title was obtained to lots 7 and 8, block 39. It was voted to levy a tax each year for the maintenance of the Cherryvale Free Public Library the cost of the lots had to be raised by gifts from citizens. The members of the Women’s Library Club each contributed fifteen to twenty-five dollars towards the amount needed which was between $1,500 and $1,800.

The Board of Directors accepted bids for the erection of the library and for architects’ fees on February 13, 1913. The money allowed for these was $9,096.20. The building was completed July 2, 1913, and it was opened to the public September 19, 1913. On that date the Women’s Library Club was proud to turn over to the new library 590 volumes and all the furniture with which the first reading room was equipped.

On February 14, 1930, the Carnegie Library was re-organized. Mrs. W.G. Norman was re-elected to serve as president of the board, Mrs. L.P. Becker re-elected as vice-president, Mrs. F.E. Shumard treasurer, and Mrs. George Vance, secretary.

The interest of the Women’s Library Club in the Cherryvale Public Library has never ceased. A fund is budgeted each year to be given for new books. The former librarian, Miss Louise Kaufman, began in 1950 what became a valuable clipping file. Members of the Library Club were also very supportive of that project.

Since 1960, the library has been given several hundred books from the private libraries of former citizens. John Marquis Smith, son of Mrs. Lea Carson, and Helen Hibbard, daughter of S.L. Hibbard, each grew up in Cherryvale. Each gave a valuable collection of non-fiction from their private libraries.

Many interesting money-raising activities to aid in the support of the library are related in the booklet, “History of the Women’s Library Club,” which is on file at the library.

Other clubs and many individuals have contributed time and money. The Progress Club has allowed a place for Cherryvale Library in their budget. Many citizens have served on the Library Board. It was by its action that the Cherryvale Library became a member of the Southeast Kansas Library System. This had made many more books available. It is also due to this that rural patrons of the library no longer need to pay a fee to use the library.

In 1970 Miss Kaufman reported that the 590 volumes of 1913 had grown to 12,477. In addition, books are available through the SEK Library System, and books may be had from major libraries because of the Interlibrary Loan Service. There are 410 adult borrowers and 596 juvenile borrowers at the present time. In 1970 circulation included not only books but also periodicals, pamphlets, recordings, and pictures. The adult circulation was 11,733 and the juvenile was 9,778, making a total of 21511. The circulation grew 1,479 in that year.

The first librarian employed for the new library was a Miss Williams from Anthony, Kansas, who served a few weeks. Them Mrs. Nora Yockey from the library in Chanute came in November, 1913, and remained until September, 1945. Miss Kaufman followed Mrs. Yockey and Mrs. Nettie Burt was her desk assistant.

Louise Kaufman served at the library for many years. Upon her death, Mr. Robert Burns built a bookcase which holds many books about the history of Cherryvale and surrounding area. This was to serve as a memorial to Louise, who was not only very interested in the history of the area; but also an avid paper doll collector. She found great delight in trading paper dolls with others, throughout the United States. She had presented this collection to the museum, but upon her death, the collection was taken. The whereabouts of the collection is now unknown. Louise is sorely missed, but the library now has another who is very interested in the town and its history; and that is Jessie Lickteig, who has been at the library for the past five years.

Others who worked there have been Kay Driskill, Vicki Stockton, Alishia Fox, and presently Johanna Parks.

As you see, the Cherryvale Public Library came into existence early in the present century through the efforts of the Library club. However, it did have a predecessor, an innovation of the Gilt Edged Mikado Club or the G. E. M. Club in the latter part of the nineteenth century. The creation of that library was reported in the November and December, 1886, issues of the Globe Torch.
“Gild Edged Mikado Club (GEM) members were appointed to solicit books, periodicals, magazines, illustrated papers, pictures, etc. from the citizens for The Cherryvale Public Library. A public library is something Cherryvale is very much in need of and calling on citizens for donations during the week, and from time to time in the future this can be started without any great expense to any one individual. The ladies of the club desire it understood that they are only the custodians of the property donated to the library, it being the common property of all, the same as all other public libraries.” (Globe Torch November 24, 1886)

With the heading “nothing Succeeds Like Success, the Globe Torch ten days later on December 11, 1886, related:
“At a meeting Thursday evening, the GEM committee on soliciting subscriptions in aid of the public reading room reported very good success. The State Bank has kindly given use of elegant rooms over the bank free until April, which are being fitted up for the public reading room.”

Then on December 14, 1886, the following quotation was printed in the same newspaper. “The GEM club met with Miss Kate Morning last evening. The members of the club are unceasing in their endeavors to place the reading room on a firm foundation.”

It is not known when or why this first attempt at a public library in Cherryvale was discontinued. Actually, ever since 1886, the citizens of our town have been interested in books and realized their importance to the people of this community.

To help defray some of the library's ongoing operating expenses, we recycle aluminum cans. We want your cans! Bag 'em up in plastic bags and drop 'em off at the rear of the library.

VOTE for the movie you want to see and be sure to include your first name and email address and send it to the Librarian.